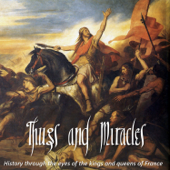 Thugs and Miracles: A History of France - Benjamin Bernier

Welcome to Thugs and Miracles, the podcast where we’re looking back at history through the eyes of the kings and queens of France – from the fall of the Roman Empire to the fall of the guillotine. To tell our story, T+M uses the royals as a unifying thread, but we don’t look at just the kings; we try to understand what life was like for the people living under them. How must it have felt to live and die, all within a 10-mile radius of where you were born? For women, how must it have felt to live in a system which, under the Salic law, prohibited them from owning land? How exactly was life in the Middle Ages, this so-called “dark age”? More than answering questions, we tell the stories of the people who made history. We tell you the story of the beautiful Frankish queen who had an affair with a god. We explore Clovis and his conversion within the deepest lines of battle, and we explore his wife, Clotilde, and why she pushed so hard to change his religion – even risking her own life in the process. We look at how a cryptic message involving a pair of scissors and a sword forced a grandmother to make a gruesome life-and-death decision and of course, we tell you about the wars fought for that highest of all positions: King of the Franks. But Kings are not enough: we also tell how Queens found ways to escape the laws and the patriarchy and rule in their own right. Join us in the year 451, at the dawn of a new age in Europe, for the rise of an Empire that will lead into the West as we know it today. Prepare for a world made by Thugs and Miracles.