The Science of Getting Rich by Wallace D. Wattles - Loyal Books 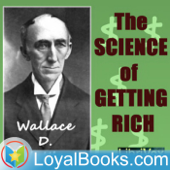 The Science of Getting Rich by Wallace D. Wattles - Loyal Books

One of the first self help books to hit the stands in 1910, The Science of Getting Rich by Wallace D Wattles was path breaking in its approach to the acquisition of wealth as a science. It went on to inspire a whole genre of “how to” books that generations of readers found informative, practical and useful in their every day lives. Its original title was The Science of Getting Rich or Financial Success through Creative Thought and in this volume, the author puts down in clear and concise language the step-by-step approach to wealth. The hypothesis underlying the concept is that every human being has the power to conceive, believe and achieve financial success using thought, willpower and visualization. However he eschews competitive and unethical paths and shows the reader that great success can be attained through a cooperative and collaborative way. Wallace D Wattles was a New Thought American writer. New Thought conceives that God is everywhere and that the basis of illness and misfortunes are basically in the mind. Wallace Wattles' life remains relatively shrouded in obscurity. He was the son of a poor farm worker, but went on to achieve great financial success and respect in his community. He died prematurely at the age of 51. He nursed dreams of running for office as a Social Democrat, but could not win an election. However, he was a living example of whatever he expounded in his books and enjoyed his life to the fullest. One of the things that makes The Science of Getting Rich so appealing to generations of readers is the concept of being in personal control of things. Ideas of taking charge of your life and achieving mastery over negative influences are eternally appealing. The book also has two companion volumes which deal with wellness and greatness. The Science of Getting Rich presents the idea of connecting to the greater Universe and getting rid of all the negativity and bad energy that we encounter. Even 100 years after its publication, it remains a seminal work in the field of self help. Modern day readers will find its practical suggestions valuable and apart from numerous video and audio adaptations, it has formed the basis of websites and even an online course which has reputedly met with roaring success. As a useful adjunct to the psychological inputs we receive from our coworkers, family and mentors, the book is designed to have a real impact on the way we view wealth.