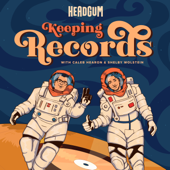 In 1977, NASA sent the Voyager into space with two records known as the “Golden Records.” On them were recordings of notable historic music, evocative nature sounds, and murmurs from contemporary life, all used to paint a picture of humanity and the world at large. Things have changed a lot since 1977, so Caleb Hearon and Shelby Wolstein are trying their hand at an update. They're talking with comedians, musicians, and the like about what they would include on their own “golden record” if a new one were sent today. Songs, images, films, and moments are all on the table in this comedic reflection on art, media, and culture.