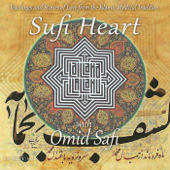 The Sufi Heart podcast with Omid Safi features teachings and stories about a sacred tradition of love, one that manifests outwardly as justice and inwardly as tenderness.  Drawing primarily on the wisdom of the Islamic tradition as well as the legacies of the Civil Rights movements and other wisdom teachings, Omid invites you to a meditation on the transformative power of love and recalling the necessity of linking healing our own hearts with healing the world.  Omid Safi is director of Duke University’s Islamic Studies Center. He specializes in the study of Islamic mysticism and contemporary Islam and frequently writes on liberationist traditions of Dr. King, Malcolm X, and is committed to traditions that link together love and justice. Omid is the past chair for the Study of Islam at the American Academy of Religion. He has written many books, including Progressive Muslims: On Justice, Gender, and Pluralism; Cambridge Companion to American Islam; Politics of Knowledge in Premodern Islam; and Memories of Muhammad. His forthcoming books include Radical Love: Teachings from the Islamic Mystical Traditions and a book on the famed mystic Rumi. Omid is among the most frequently sought out speakers on Islam in popular media, appearing in The New York Times, Newsweek, Washington Post, PBS, NPR, NBC, CNN, and other international media. He leads spiritual tours every year to Turkey, Morocco, or other countries, to study the rich multiple religious traditions there. The trips are open to everyone, from every country. More information is available at Illuminated Tours.