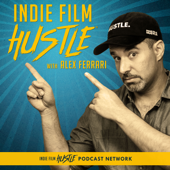 The Indie Film Hustle Podcast is your #1 source for how to hack the film business and indie film world! The show is here to help as many indie filmmakers as I could. We wanted to bring the best guests, industry leaders, creative legends, and film business friends to you, the IFH Tribe. Some of the past guests include 3X Oscar® Winning Writer/Director Oliver Stone, Barry Sonnenfeld (Men in Black), Alex Proyas (The Crow, I, Robot), James V. Hart (writer Dracula, Hook), John August (Big Fish, Aladdin), Jim Uhls (writer of Fight Club), Oscar® Winner Russell Carpenter (DP of Avatar, Titanic) Joe Carnahan (Smokin' Aces, The Grey), and David F. Sandberg (Shazam!) to name a few. We hope this podcast can help you along your journey as an artist, filmtrepreneur, filmmaker, screenwriter, and as a human being.