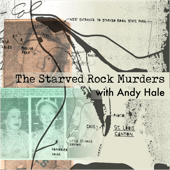 In the winter of 1960 three women were found brutally murdered in a cave at the Starved Rock State Park. After months of dead ends, a manhunt ensued that ultimately pinned the crime on a 21-year-old dishwasher at the Starved Rock State Park Lodge, Chester Weger. In spite of contradictory physical evidence and under immense pressure from the police, Chester confessed to the crime. He has spent the last 60 years in prison, maintaining his innocence to this day. Join Andy Hale, a civil rights attorney who specializes in investigating wrongful convictions, as he dives deep into parts of the case that have been left out of previous coverage. As Chester Weger’s attorney, he is actively investigating the case and has won the right to test DNA from the crime scene for the first time in 60 years. If Chester is innocent, this will become the longest wrongful conviction case in United States history. This limited series podcast will re-examine the story you think you know, provide real-time case updates, including DNA testing, and access to documents and photos previously unreleased to the public, to uncover the truth of what really happened in Starved Rock State Park over half a century ago.