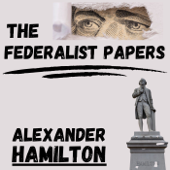 The Federalist Papers (correctly known as The Federalist) are a series of 85 articles advocating the ratification of the United States Constitution. Seventy-seven of the essays were published serially in The Independent Journal and The New York Packet between October 1787 and August 1788 . A compilation of these and eight others, called The Federalist, was published in 1788 by J. and A. M’Lean. The Federalist Papers serve as a primary source for interpretation of the Constitution, as they outline the philosophy and motivation of the proposed system of government.The authors of the Federalist Papers wanted to both influence the vote in favor of ratification and shape future interpretations of the Constitution. View our full collection of podcasts at our website: https://www.solgoodmedia.com or YouTube channel: www.solgood.org/subscribe This is a Librivox Recording. All Librivox recordings are in the public domain.