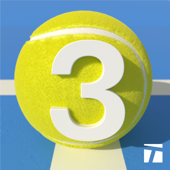 “Three — A Tennis Show” is focused on Roger Federer, Rafael Nadal, and Novak Djokovic. We explore all aspects of this remarkable trio – from breaking news to technical and tactical analysis, historic significance, their evolution as players and personalities, their intriguing rivalries, and much more. Three is also available on YouTube.The host is Gill Gross, currently a senior at the Newhouse School of Public Communications at Syracuse University. Gill has a deep command of broadcasting and tennis, including serving as host and producer for another show, “Monday Match Analysis.” Gill is joined by two accomplished tennis journalists, Amy Lundy and Joel Drucker. Lundy, a former on-air reporter for CNN, Turner Sports and News 12 in Connecticut, writes frequently about the sport for such outlets as 538, ESPN.com, Last Word on Tennis and others. Drucker’s work has appeared in Tennis.com, Tennis Channel, Racquet and many more.