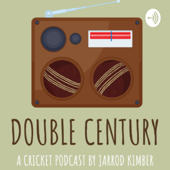 This is a podcast series on the history of cricket through the people and moments that made the game. Series 4 is a look at South Africa's incredible all-rounder, Aubrey Faulkner. Double Century is a team effort. Jarrod Kimber wrote, produced and narrated this series. Nick McCorriston is our producer (https://twitter.com/soundboy_audio).