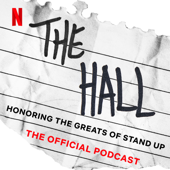 The Hall: Honoring The Greats of Stand Up | The Official Podcast - Netflix

The Hall honors the lives and careers of the greats of stand-up comedy, serving as a companion to The Hall: Honoring The Greats of Stand Up, streaming on Netflix May 19th. Each of the four episodes of this inaugural season will look at a different comedy titan. Episode One explores the work of George Carlin – his obsession with words and the joy he took in repeatedly poking the eye of authority. Episode Two looks into the brilliance and longevity of Joan Rivers – not only one of the best comedians ever, but a pioneer who opened doors for many women comedians of today. Episode Three is about Richard Pryor who changed comedy forever with his gift for storytelling and his stark honesty on stage. Episode Four is about Robin Williams whose riffing, stream-of-consciousness stand-up is unique and beloved. Produced by Netflix Is A Joke Radio, Netflix Podcasts, and Radio Point, we speak to family members, friends, admirers, and colleagues about these incredible icons. Episodes drop weekly. Audiences can also see host Cristela Alonzo in her upcoming Netflix special "Cristela Alonzo: Middle Classy" premiering globally on June 28 only on Neteflix.