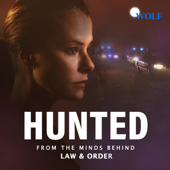 From Legendary producer Dick Wolf comes a new audio fiction series starring Parker Posey about the U.S. Marshals dedicated to capturing the country's most dangerous fugitives. When four convicts escape from a maximum security prison, Deputy Marshal Emily Barnes (Posey) is called in to pursue the criminals in one of the most treacherous and violent manhunts in United States history. Directed by Shawn Christensen (“Blackout”) and produced by Jenny Radelet Mast (Marvel’s “Wolverine”), HUNTED is the first in a slate of audio fiction series to be produced by Wolf Entertainment in partnership with Endeavor Content. Learn more at EndeavorAudio.com. To see how we use your data, visit https://www.endeavoraudio.com/privacy-policy.