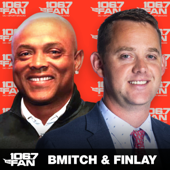 Mitchell began his media career in 2003 after a 13-year career in the NFL. He previously hosted the “Brian Mitchell Show” on now sister station 980 The Team (WTEM-AM), and is an analyst on NBC Sports Washington Commanders pre-game and post-game coverage. Finlay has been NBC Sports’ Washington Commanders beat reporter since 2016 and will continue that role while adding hosting duties to the Fan.