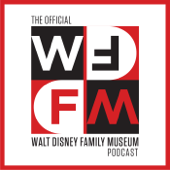 The Walt Disney Family Museum is a center for art, animation, and inspiration. Located in the historic Presidio, a national park in San Francisco, California, the museum celebrates the remarkable life of Walt Disney by telling his story, celebrating his legacy, and examining his influence on the world of entertainment. Ten years ago, we were founded in 2009 by Walt Disney’s daughter, Diane Disney Miller, who wanted to share the story of her father with the world. Now, we are hosting a year-long celebration to mark the museum’s tenth anniversary. In recognition of the museum’s history, and in order to honor the man behind the magic, this podcast will be an extension of that celebration. Join for stories and conversations about the remarkable life and legacy of Walt Disney as we reflect on The Walt Disney Family Museum's first decade as an institution.