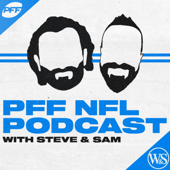 Steve Palazzolo and Sam Monson bring you an NFL podcast unlike any other, because it comes backed by Pro Football Focus and their unique data insights. PFF watches and grades every player on every play of the NFL season to give you a look inside the game nobody else can rival. From uncovering secret superstars around the league to discussing which teams are best positioned for a Super Bowl run, Steve and Sam use football's most in-depth database to create an informative listen for every level of NFL football fan. Come January, they turn their attention to the draft, because today's NFL has no off-season, and draw upon PFF's play-by-play grading of every FBS college game to shape their draft discussions.