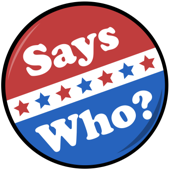 In 2016, two friends—and author and a journalist--sat down to ride through the final weeks of the Presidential election by talking to the journalists covering it. They thought they were doing eight episodes. They were wrong. What started as a short trip has become a long and strange journey. They’ve gotten weird. They’ve made friends along the way. Mostly, the weird part, though. Join #1 New York Times bestselling author Maureen Johnson, and legendary publisher of Punk Planet Magazine Dan Sinker as they digest the news each week. Says Who: it’s not a podcast—it’s a coping strategy.