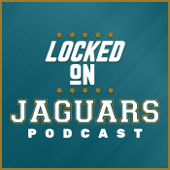 Tony Wiggins has covered the Jaguars for 10 years combined as a Midday radio host on the Jaguars flagship station of the Jaguars' as well as an NFL analyst for First Coast news, the NBC and ABC affiliate of Jacksonville. T-Wigg , as he's known in the region, is a Jacksonville native who has watched and closely followed the team since it's inaugural season in 1995 and is as connected the the team and personifies the unique make up of the city that is known as DUUUUUVAL! From player relationships to being known by front office as someone who "does the work" required to make and develop opinions, he prides himself as having his finger on the pulse of the team as well as the fan base. From draft coverage, free agency signings, to contract disputes and negotiations, access to breaking information is just a speed dial away. This will be his second full season covering and delivering content for the Locked On Podcast network..