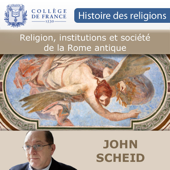 J. Scheid has dedicated both, his thèse de IIIe cycle (1975) and his doctorat d'Etat to the exploitation of epigraphic and archaeological evidence on public priesthood and official religion in Imperial Rome, namely to the Arval brethren, whose considerable political and religious relevance had so far been ignored: He has shed light on the social background that their priests were recruited from and has supervised the excavation and examination of the sanctuary that the fraternity administered and used. John Scheid has based his subsequent studies on the Arval brethren's annual protocols, so as to reconstruct and interprete the rituals that the fraternity had established. From these he has derived a model, that he has proven to be applicable to all public religious acts in the antique city of Rome. In identifying these acts as essential parts of public life, he has established them as valid sources for analysing the institutions of the Roman Empire in its entity. His research presently has three directions : He continuously works on the institutions in Imperial Rome in general and is preparing a new edition of the Res Gestae Divi Augusti. A second branch of his studies is dedicated to the religious practice of the Romans: he supervises the excavation and analysis of cult sites in Rome and Tunisia (La Magliana and Jebel Oust) and manages the project Inventory of the cult sites of antique Italy' in collaboration with Olivier de Cazanove. An additional project deals with the archaeology of rituals: in this area, J. Scheid's main interest lies on the concrete traces of religious practices, as they manifest themselves in death ritual. Together with Jacopo Ortalli, he has initiated the foundation of an international team of experts on necropole excavations, which is currently carrying out the exemplary excavation of a completely untouched necropole in Classe (Ravenna). In a third research area, John Scheid examins Greek and Roman mythology in a comparative research method, in cooperation with Jesper Svendro.