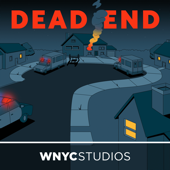 New Jersey politics is not for the faint of heart. But the brutal killing of John and Joyce Sheridan, a prominent couple with personal ties to three governors, shocks even the most cynical operatives. The mystery surrounding the crime sends their son on a quest for truth.  Dead End is a story of crime and corruption at the highest levels of society in the Garden State. Episodes release every Tuesday.